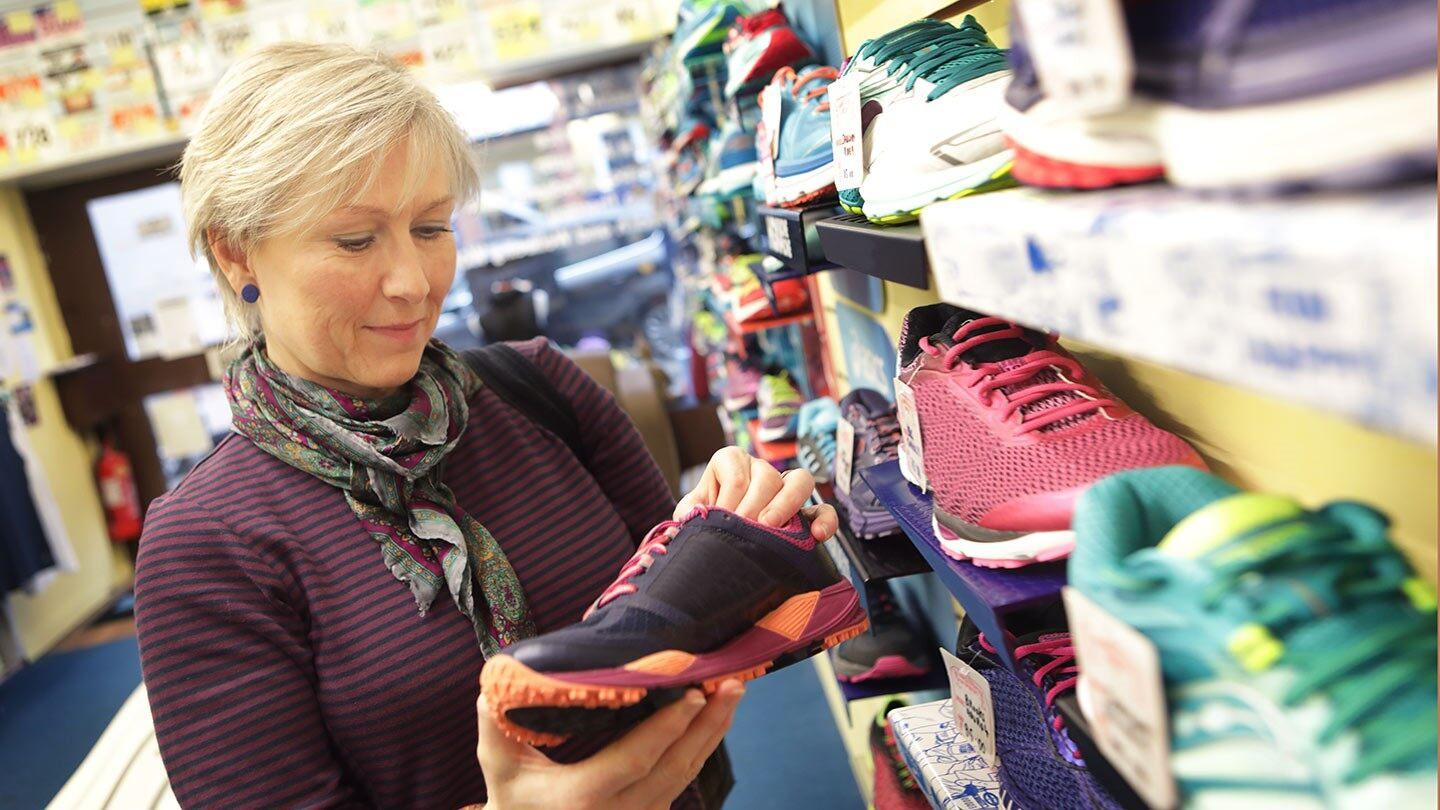 
When you have type 2 diabetes, you need to pay close attention to your feet and the shoes you put on them.
Heres why: People with type 2 diabetes have an increased risk of developing poor circulation and nerve damage in their feet, according to the American Diabetes Association (ADA). Poor blood flow to the feet makes it more difficult for wounds to heal. Even minor issues, like calluses, blisters, and cuts, can become serious problems and lead to infection. And nerve damage can cause loss of sensation in your feet , so you may not feel if you step on something sharp, if your shoes are rubbing or pinching, or if you get a blister.
All of this means that the right footwear is a must. Your shoes must not only be comfortable but fit well too, says Adam Isaac, DPM, director of the Complex Foot Wound Clinic at Kaiser Permanente Mid-Atlantic States. Shoes that fit properly can help protect your feet and reduce your risk of developing foot ulcers and infections.
Heres how to be sure the shoes you wear are diabetes-friendly:
See your podiatrist before you shop. Your podiatrist can recommend the best type of shoes for you and let you know if you need custom orthotics, says Dr. Isaac. Orthotics can provide additional comfort and support, according to the American Podiatric Medical Association. You may need prescription diabetic shoes that have extra depth to them and supportive arches, Isaac says.
Shop for shoes later in the day. Your feet can swell over the course of the day, and you want to get a true idea of how the shoe is going to feel in real-life scenarios, Isaac says. Continue reading


- Drastic & sustained weight loss through diet control can lead to long-term remission: Doctors
New Delhi, Sept. 13: Some patients with diabetes may reverse the disease and celebrate long-term remission through drastic weight loss, a team of British doctors said today, challenging the conventional management of diabetes practised for decades.
The doctors said there is significant evidence that the reversal of diabetes is now "clearly attainable" for some, possibly many, but most patients and doctors remain oblivious to these developments and still consider the diagnosis of diabetes a permanent label.
Well-designed, diet-based strategies have been shown to lead to rapid and substantial weight loss and get patients to maintain a 12kg to 15kg weight loss for periods of a year and sustain it beyond, the doctors said, citing studies in the UK over the past five years.
"It is not easy to achieve this, but every person diagnosed with diabetes should get a chance to try it," Mike Lean, professor of human nutrition at the University of Glasgow who is involved in such weight loss studies told The Telegraph over telephone.
"Unfortunately, most patients and many doctors still misleadingly view diabetes as an irreversible condition. A lot of people are being misled into believing that once diagnosed with diabetes, they'll remain diabetic forever."
Lean and his colleagues are questioning a core concept in diabetes management which currently is focused entirely on controlling blood sugar through a mix of drugs and lifestyle management to avoid complications - cardiovascular diseas Continue reading 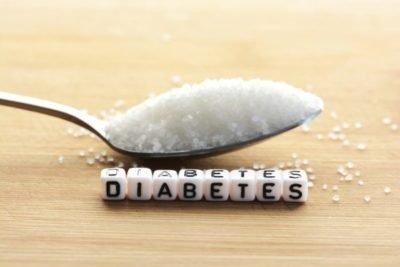 
Since November 14th is World Diabetes Day , a day dedicated to raise awareness of diabetes, its prevention and complications, and the care that people with the condition need, we decided to sit down with Kathryn Peeden, M.D. (Dr. Katie) to discuss the Type 2 Diabetes epidemic in the United States.
AIM: Hi Dr. Katie. Thank you for sitting down with us to talk about diabetes today.
AIM:Let me first start out by reading you some statistics from the CDCs website : It is estimated that 30.3 million people have diabetes in the United states, which amounts to nearly one in ten people. Since only 5% of those with diabetes have type 1 diabetes , we wanted to spend a moment with you discussing the more wide-spread type 2 diabetes . With over a million new cases being diagnosed annually, what do you find is the number one misconception your patients have of this disease?
Dr. Katie: Too many of my patients are under the misconception that their diabetes is genetic and therefore permanent; that theres nothing they can do to improve their outcome. Many people too often say, My mom or dad had it, so I knew Id get it.
Dr. Katie: Like many disease processes, there is a genetic component, but genes merely show someones propensity towards health or illness they are not Tarot cards; they dont predict our future. Research shows us that genes can be turned on and off depending on our diet and lifestyle choices, so using genetics as a reason for having type 2 diabetes cripples the persons hope of turning their disease around.
Dr. Katie: With proper supplementation, dietary and lifestyle c Continue reading 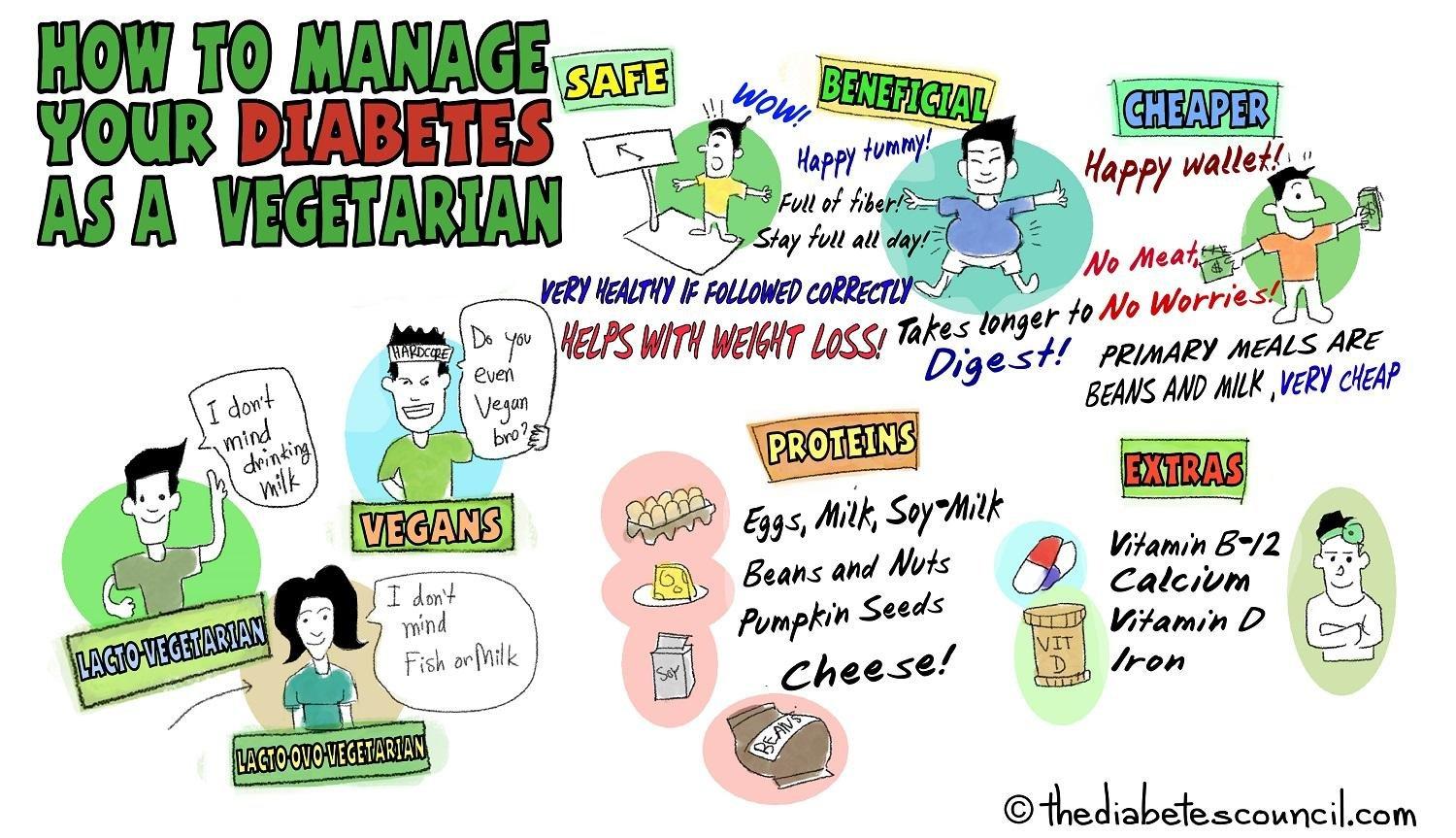 How To Manage Your Diabetes As A Vegetarian

In this article, we will take a look at the benefits of following a vegetarian diet if you have diabetes. Though we cannot recommend a drastic change in one’s diet, we will enumerate the benefits of following a vegetarian diet. Prior to making any major changes in your diet if you have diabetes, it is imperative that you check with your primary care provider, and registered dietician or Certified Diabetes Educator for their input and expertise.
Types of vegetarians
Vegan
A vegan is the strictest type of vegetarian. The vegan diet is referred to as a “total,” or “pure” vegetarian diet. People who are vegans do not eat any meat or animal products, including eggs and dairy products. This also includes fish and seafood. They are on a plant-based diet.
To get the protein needed daily on a vegan diet, a person with diabetes could eat soy based products such as tofu or soy milk, all sorts of vegetables, and a variety of beans and whole grains. This is important because proteins are the “building blocks,” and have important functions related to cell structure and function, and even to make the hormone insulin.
Because a vegan diet is low in vitamin B12, a multivitamin or supplement is usually recommended for a vegan diet. Ask your doctor before going on a vegan diet plan, and inquire about your vitamin B-12 needs while on a vegan diet.
Lacto-vegetarian
The lacto-vegetarian doesn’t eat meat or eggs. However, they don’t mind including milk products in their diet.
Lacto-ovo vegetarian
This group does not eat any meat, but they do enjoy animal products such as eggs an Continue reading 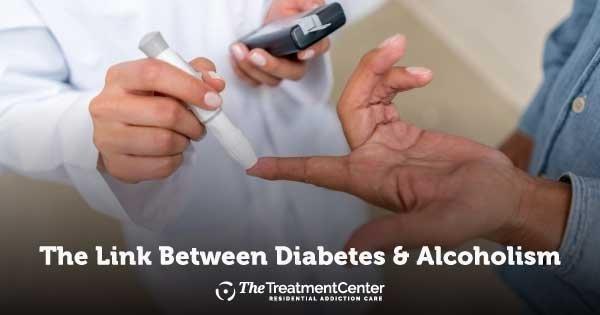 The Link Between Diabetes and Alcoholism


The connection between alcohol and health consequences is hardly a secret. While drinking in moderation may have some small benefits, drinking heavily does the opposite, threatening everything from organ function to life expectancy. Alcohol is damaging to the brain, the liver, blood pressure, and more, putting your entire body at risk for irreversible damage.
During the depths of addiction, many alcohol abusers assume these issues are overstated or wont happen to them. Unfortunately, this is far from the truth. A majority of alcoholics will eventually develop related complications, with almost all long-term binge drinkers experiencing liver disease and 35% of heavy drinkers eventually developing alcoholic hepatitis.
If the well-known consequences werent bad enough, new research indicates that alcoholism may be connected to yet another harmful condition: type 2 diabetes. Also known as adult-onset diabetes, this disease carries with it a significantly increased mortality rate , putting happiness and health at grave risk.
Diabetes refers to a group of diseases caused by too much sugar in the blood. In general, most patients have either type 1 or type 2 diabetes. Type 1 diabetes, or juvenile diabetes, is a form in which your body does not make its own insulin. Instead, the immune system attacks and destroys the cells in the pancreas that produce insulin, requiring the use of an artificial pump to supply the body with insulin. Type 2 diabetes, which accounts for 90% to 95% of all diabetes cases , is an alternate form in which the body does not produce enough insulin or does Continue reading